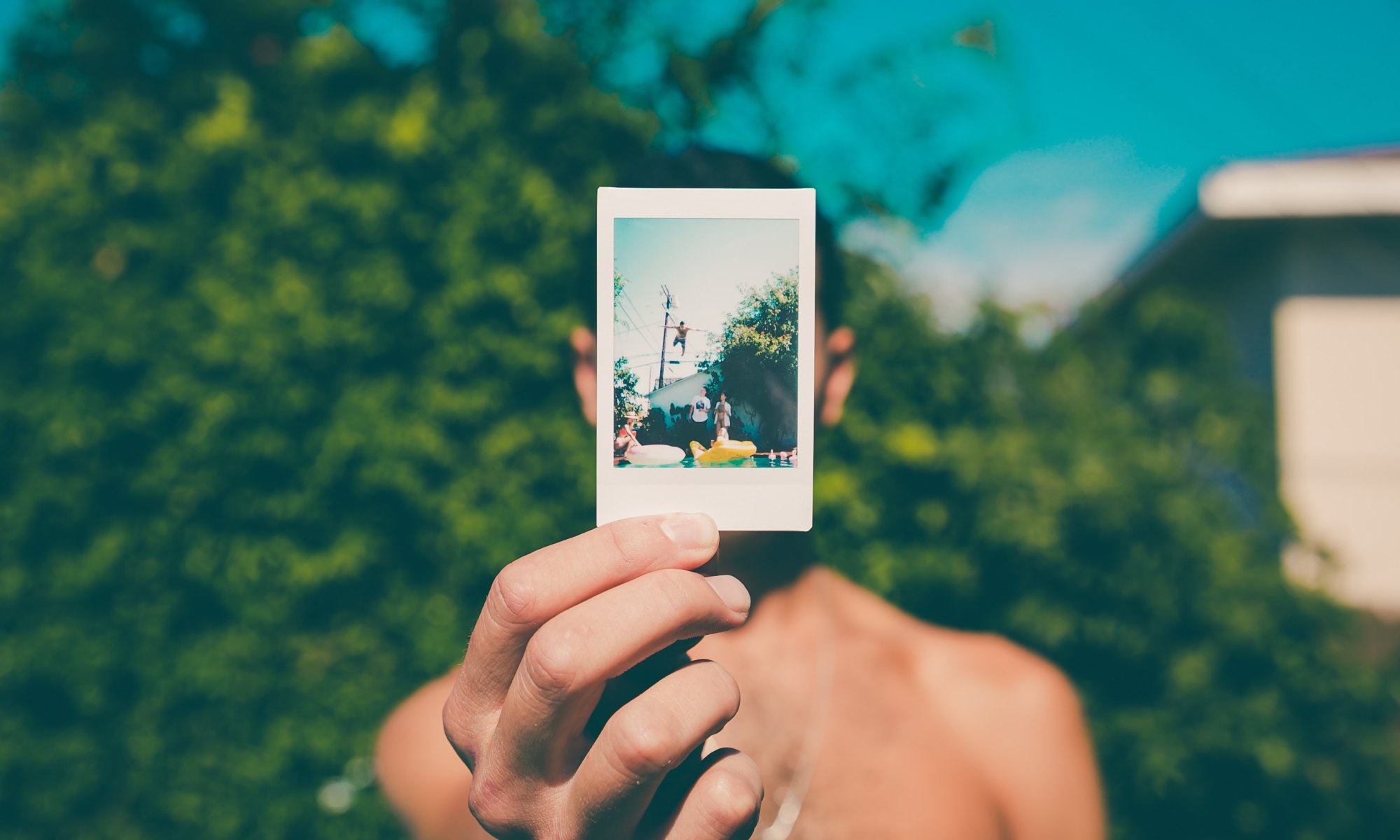 “It’s hard to believe that there once existed a time when good, old fashioned, natural memory was the only of method relaying their own unique version of events to others.” – Andrew McGinley.

Since the beginning of time, we have documented the events of our daily lives. Whether this was through cave paintings, literature, portraiture, or, more recently through our mobile devices, creating lasting depictions of our lives seems to be an old habit that is dying hard. And, it seems that this habit has been heightened by the contemporary popularity of photo-sharing sites (i.e. social media). As society becomes increasingly concerned that “the presence of a camera somehow sullies the purity of an experience” (Purtill, 2016), it should be considered that although we currently live in a “media obsessed age” (McGinley, 2016), we have always had an obsession with media. Just as Vincent Van Gogh experienced a Starry Night through a painting, we now experience our lives through our digital devices. But, at what point does the digital come to mediate our real-life? And, when do we stop remembering ‘the moment’ and only remember the photo we took of ‘the moment?’

Photo by Randy Tarampi on Unsplash 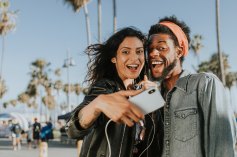 Photo by rawpixel on Unsplash

For the past 3 weeks, I have been undertaking an digital ethnographic study of the relationship between our memories, and pictorial documentation. To conduct this study, I utilised two approaches: a short survey, intended to collect quantitative data which I could use to identify trends, and, collaborative ethnographic interviews, intended to provide the rich qualitative data that the survey may lack.

The interviews took the form of a collaborative digital ethnography, where myself and the participant discussed their thoughts on the topic, whilst browsing their personal digital archives. I then took my own documentations of this ‘event’ and curated them into an Instagram feed. Thus, establishing an interactive archive of my research findings.

To supplement these findings, I am producing this blog post, where I will provide background research, and map out where my research sits in the ethnographic field of study. I will be discussing the theories of Cognitive Offloading, and Memory Recollection, and their connection to the complex relationship between our devices, our real-lives, and our memories.

Reviewing my previous posts on the topic ( 1  |  2 ) would be recommended for contextualising the following content. And, my research findings can be viewed here.

Whatever You Can Do, Your Phone Can Do Better

If you’re confused by the above statement you’re probably not alone. Basically, it addresses the relationship between our bodies and external objects when we process information (Risko and Gilbert, 2016, p.685). Specifically, it is describing the phenomena wherein an individual uses an external aid to do the remembering for them. For example, you might write down in your calendar that you have a meeting at 4pm on the 27th of November, or you might set up a reminder in your phone. Once you have done so, this memory is now contained within the physical device, rather than within your internal processing system.

And, this process becomes very interesting when considering how people use their personal devices to document real-life events. When someone takes a photo of something, they are focusing on their device – not the moment. So, it could be said that either purposefully, or inadvertently, they are cognitively offloading the task of remembering that moment onto their device. 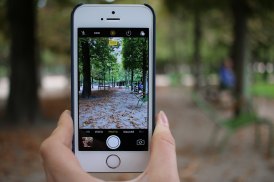 Photo by Lubo Minar on Unsplash

Photo by Kevin Grieve on Unsplash

The following trends emerged from my recent ethnographic study:

Foremost, 86% of survey respondents said that they remember something more if they take a photo of it. With many of them remarking that photos often act as visual aids for recalling memories, evoking new details about the captured event, and leading to recollections of the feelings or emotions involved on the day. One respondent explained the process of Cognitively Offloading memories into photographs using the following analogy:

Throughout the interviews, the respondents generally acknowledged that if they took a photo at an event, this is what they remembered, but they were able to recall other memories about the day upon looking at the documentations from that day . Thus, it can clearly be acknowledged that pictorially documenting real-life events can lead to Cognitively Offloading certain details of a memory, and storing them within the physical device.

However, because of the apparent existence of two ‘sets’ of memories (the recalled memories, and the memories contained within the documentations), a question of authenticity arose.

The Question of Authenticity

As such, storage and retrieval became central concerns of my ethnographic study. Specifically, which ‘version’ of our memories are more authentic: recollections, or documentations?

There are many models which aim to explain the process of remembering. One such model is the Multi-Component Model proposed by Atkinson and Shiffrin in 1968, which is as follows:

Following this model, when we remember things, some of the information becomes lost along the journey towards long-term memory. So, our recalled memories then become questionable. Furthermore, Ed Yong (2013) reports that it is “easy it is to disrupt our memories, and supplant what we think we know with misinformation”. Whilst Risko and Gilbert remark that “offloaded representations may be more durable and less prone to distortion than those stored internally” (2016, p.681).

So, overall, it seems that there is a consensus which leans towards the reliability of documented (or offloaded) memories.This was evident in the ethnographic study, in which 59% of participants felt that their memories changed each time they recall them, and 66% of participants identified documentations as more authentic than recalled memories. But, the question of authenticity seemed to depend on the individual’s definition of ‘authentic’. 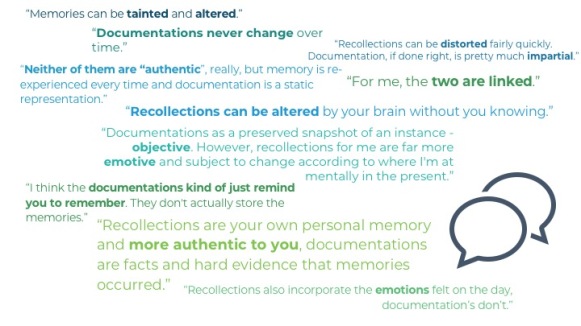 Thus, qualitative analysis allowed key trends to emerge. For some respondents, memory is very complex so neither ‘version’ of their memories were more authentic than the other – because the two are cognitively linked. Whereas others felt that ‘authentic’ depended on whether the memory was an accurate representation of the event (in this case the documentations were perceived as more authentic), or an accurate representation of personal experience (in this case recollections were perceived as more authentic). Generally, respondents viewed documentations as “objective” and “impartial” and recollections as “subjective” and “emotional”. And, stated that memories can be flawed or rewritten, whereas documentations can’t change. Ultimately, leaving the Question of Authenticity partially answered, and in need of further exploration.

It’s All About ‘The Moment’

A trend I didn’t foresee was the importance of ‘the moment’. Of the surveyed participants, 98% document the events that they attend, with most of them doing so frequently. On average, most participants spend 1-10 minutes capturing documentations at events, with a further one quarter of them spending 10-30 minutes doing so. Every interviewee struggled to think of an event which they attended, but didn’t take any photos of. While, 64% of the participants signified taking documentations of a day out as either somewhat or highly important to them, but only 41% said that the process of capturing documentations took away from their real-life experiences.

So, people are documenting their experiences, quite frequently, and carefully, but it isn’t stopping them from enjoying ‘the moment’. This was further explained by the participants, who stated that it depends how much time you spend taking the documentations, because you can ruin a moment trying to capture it. For them, this was because taking a picture can take you out of the moment by focusing on something else. But, it can be fun framing experiences, so disconnecting doesn’t have to be a negative thing. After all, the documentations give you something to look back on, and remind you of the event, and taking photos in groups can be a social interaction.

And this intrigued me.

Photo by Felix Rostig on Unsplash

Photo by Joey Thompson on Unsplash

Photo by Nik MacMillan on Unsplash

Evidently, memory is a very complex system of processes through which we interpret, sort, and remember information. Historically, we have relied on external aids to help us remember, cognitively offloading the task of recollecting information and memories. Centuries ago, this may have occurred in the form of scribbling something down, but now, this occurs when we take photographs of things to remind ourselves of them. Recollections are volatile, and there is a consensus that they cannot be trusted. Instead, the documentations which depict these recollections stand as objective reminders of the true events. Most importantly, digital documentation has become embedded within our lives. It is an artistic outlet, and a way to remember. But, ultimately, what it means to be ‘in the moment’ has now expanded to include a small fragment of time wherein a documentation of that moment is captured.

What’s more authentic to you: recollections or documentations? Comment below.

Yong, E., 2013. When Memories Are Remembered, They Can Be Rewritten. [online] Nationalgeographic.com. Available at: <https://www.nationalgeographic.com/science/phenomena/2013/05/20/when-memories-are-remembered-they-can-be-rewritten/&gt; [Accessed 25 Sep. 2018].

One Reply to “Memories fade, but pictures last forever.”